Home SPIRITUALITY & AWARENESS VANTAGE: the most important map in Spirituality 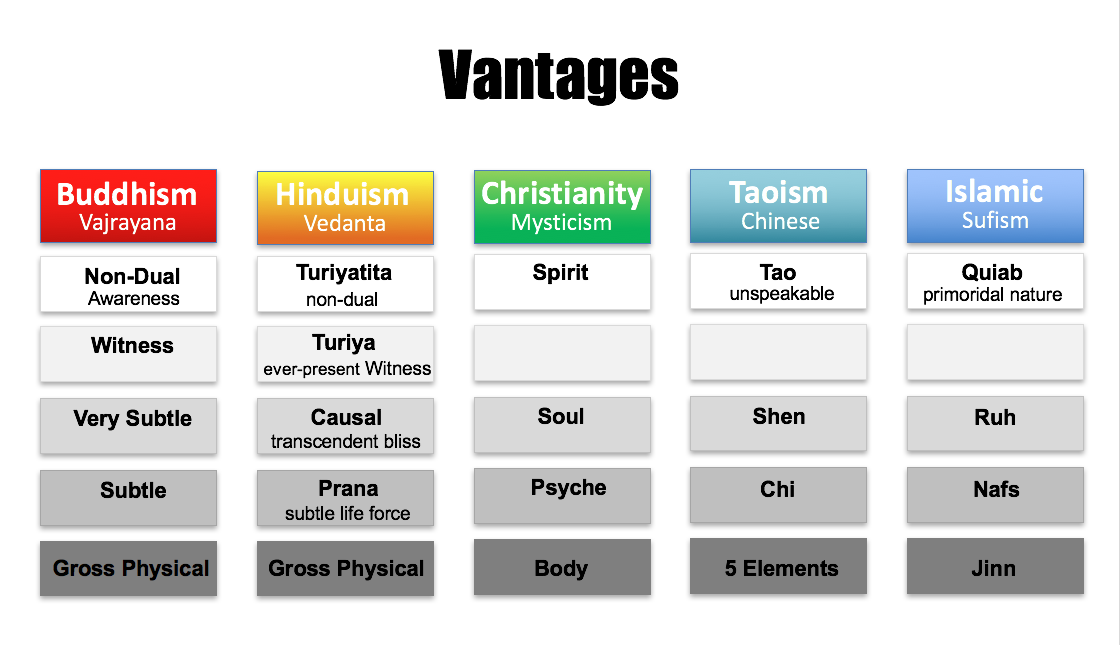 Openness: sense of vast openness in any 1 or all of 3 awakening centers including mind, heart and/or belly

Witness: the ever-present observer of the objects of experience beyond space, time, identity & concept

Much of this vantage blog chapter on the work of Ken Wilber (one of the greatest living synthesizing philosophers & mapmakers), Daniel P. Brown (Psychologist & Professor of Psychology at Harvard) and Dustin Diperna (author, mediation instructor & integral comparative religion expert).

Many of the great wisdom traditions had similar interpretive maps of progressively developed states of consciousness or vantages. In the 5 x 5 vantage comparison chart shown as the main blog image for this post, we see that these 5 different wisdom traditions each realized similar vantage state-structures of consciousness existed, enveloped the previous vantage and developed progressively.  This is referred to as The Great Chain of Being—like a set of Russian Nesting Dolls—which exists as a nested hierarchy or a holarchy in which each part is both a part of the larger and a whole in and of itself. Religious scholar, Dustin Diperna emphasizes the importance of this vantage map and a “faith-neutral’ spirituality that simultaneous honors cultural uniqueness but in addition to correcting for cultural biases and historical limitations, “also allows us to access underlying commonalities that hold true across cultures and traditions.” In other words, regardless of culture of time period, is there an essential map of spiritual development? This is that map, discovered and similarly noted in these 5 major spiritual traditions; and these vantages are not to be merely taken as mental concepts but to be felt and lived from and as.

We begin our human experience in the embryonic fluid of the womb, merged with our mother and experience the world initially from a vantage that feels like an undifferentiated ocean. Our developmental journey into adulthood offers the potential of ever-increasing vantage awareness, initially viewing and feeling the physical world of skin, bones, rocks, tress and other dense matter with the 5 senses as a separate individual. For many of us this vantage of gross physical sensorimotor awareness will remain our baseline body or view of the world throughout our lives. Some of us who are still exclusively physically oriented to the five senses and are not as aware of subtleties of life vantage and have not yet developed the human ability to feel the more nuanced subtle aliveness, emotion and electricity of life.

NOTE: remember each vantage must be stabilized so some people who hold most of their attention in the mental world of thought or have become emotionally numb and/or dissociated out of the body due to unintegrated past emotion and trauma, should focus on being more grounded and able to sense their physical body. The more stabilized we feel in the physical vantage the more relaxation, pleasure and comfortable we feel in our body, the quieter the mind, as well as the more smooth & coordinated we feel in our movements.

Our bodies have a subtle, emotional and electrical aspects to them. From basic anatomy and physiology, we know that our nervous system transmits electrical impulse to our brain and that every cell in our body has electrical potential. Medicine uses electrocardiograph (EKG), electroencephalograph (EEG), and Electromyograph (EMG), to measure electrical activity in the heart, brain, and muscles respectively.  Nearly 5,000 years ago the Chinese Medicine discovered an intricate system of energy meridians that run throughout the body. Along with Stanford Professor of Material Sciences and Engineering and physicist William Tiller, the late Hiroshi Motoyama, scientist and founder of the California Institute of Human Science have been leading pioneers in scientific research into measurement in the subtle vantage dimensions of human experience.

In Psychology the concepts of emotional contagion, rapport & shared resonance are available in the subtle dimension of experience. The subtle vantage of life also includes state experiences of being in the zone of athletic performance, creative flow, dreams, visions, insight, musical rapture, sexual ecstasy, meditative absorption, etc. Some people can notice the subtle dimension of life by putting their attention on it, but eventually for others it becomes a stabilized experience such that they continuously feel subtle textures of experiences including the subtleties of emotion, energy, breath, orgasm, the vibrations of sound and music, as well as the shared resonance of empathy or rapport, and the advanced bodily awareness of athletes, performer & martial artists. For some people greater subtle vantage awareness simply continues to effortlessly happen while for others more frequent subtle states occur after repeatedly practicing a state altering activity such as a sport, martial arts, dance, music, yoga, breathwork, etc.

NOTE: if you can’t feel anything subtle you might need to go back & wake up the physical vantage more including doing some deeper body-based healing work. If you have felt subtle energy in peak moments continue to practice activities that help to open your subtle capacities. If subtle energy is something you commonly feel, keep practicing until it is part of your baseline body felt each moment, the instant you wake up, in peak states and even in lows.

While the subtle vantage dimension of life adds felt texture, emotion and electricity to our lives, the next vantage dramatically extends our span of awareness. The spacious openness or casual vantage of life is described as a sense of a field that extends infinitely in all directions either from a wide-open heart, spacious mind, and/or bliss belly field. While each of us have a personal heart and mind, this structure in the nested hierarchy of human vantage is the container for Big Mind and Big Heart as Zen teacher Dennis Merzel (Genpo Roshi) calls them  NOTE 1. David Deida poetically inspires and points out ever-available openness of freedom and love NOTE 2. Adyashanti has discussed this openness in the awakening process of the head, heart and gut—a process which he notes can vary from person to person in terms of having vast openness admittance in one, two or three of these access points ^NOTE 3. In relation to some of the great wisdom traditions Hindu Vedanta might call this 3rd vantage the “causal” dimension and in Vajrayana Buddhism it might be termed “very subtle”. When the mental center is spaciously open as Big Mind, it can seems to be relatively empty and quiet of mental content and spaciously extends outward without boundaries. When the Big Heart center is vastly open extending outward without boundaries, it can feel like immense joy and love for life and others describe a sense of great fullness and massive compassion for humanity.

Some people may have experienced a temporary extraordinary state of infinite spacious openness. Even fewer people, either through meditative practices, conditions of living and/or by grace, have stabilized this nearly infinite spacious openness as a baseline body-view vantage of the world. Some new agers like to say the phrase “we are all one” or “it’s all love”, however usually this is done by repeating a mental concept they have read or heard and in some cases retrieving a memory of a previous state experience.  Anything not directly accessible in the immediacy of this present moment is but a mental concept and it is at a certain stage of development (Turquoise), that mental concepts become increasingly seen as constructed. So, in order for this to be felt as a vastly open embodied experience versus a mental concept or memory, it requires brief glimpses of access to this vantage and eventually cultivation to stabilize this as the baseline body-view or vantage of experience. It is somewhere between this spacious Openness vantage and the next, Witness vantage, that the personal sense of self is increasingly seen as a more transient and less fixed identity that progressively begins to fade in and out as the exclusive focal point of awareness.

NOTE: this one can’t be forced, but it is undeniable when one of these 3 centers opens. Grace can strike any moment or some people can transmit this openness vantage & help your system get a taste.

The next greater vantage is Witness Awareness. It is an ever-present Observer of experience, like a unified camera neutrally noticing the totality of life. This ever-present witnessing quality of Awareness is thus beyond time, observing the passage of states, forms, and experiences throughout an individual’s daily Waking life, while in Rapid Eye Movement (REM) states of Dreaming and even possibly during deep dreamless sleep. Most people spend their entire lives exclusively identified with their personal sense of “me” and its incessant thoughts, or subtleties of emotions & energy, even space and time, yet the ever-present camera neutrally Witnesses all that arises whether waking, dreaming or the deep nothingness of deep sleep. Witness Awareness transcends and includes it all. Witness Awareness is most commonly cultivated through mindfulness practice and meditation training, initially experienced in temporary glimpses when the exclusive identification with my sense of self temporarily relaxes. While Witness is a profound view to experience even momentarily and especially when stabilized, its ever-present unified camera-like observation still has an individual observer viewpoint. Yet, the neutral witness capacity of this vantage is able to increasingly see with clarity as Dustin Diperna in his book Streams of Wisdom NOTE 4, elucidates the “confusions of awareness” and progressive clarifications that come with greater vantage: including confusion with thought, personality, space, time, individuality and, ultimately as even the subject-object duality of the witness is absorbed. A view from this vantage, just before crossing over feels like an almost seamless, deeply contented, completely neutral, observing camera view.

It is only when this subjective observer and the objects of observation – when the observer, observed and observation all merge and become one – that the Non-Dual nature of Awareness is known. In the Tibetan Mahahudra Tradition there is a localized and non-localized version of this—the later of which Daniel P. Brown, NOTE 5 It is perhaps best not to say too much, some things are unspeakable and can only be pointed to, and Ken Wilber puts it best:

“Spirit can be known, but not said; seen, but not spoken; pointed out, but not described; realized, but not reiterated. Conventional truths are known by science; absolute truth is known by satori. They simply are not the same thing. In short, there is non-dual or absolute truth, and there is relative or conventional truth, and one simply cannot take an assertion of the latter and apply it to the former. When we use finite words to try to represent ultimate Suchness, the most we get is poetic metaphor (or metaphoric statements), but the absolute is known only by a direct realization involving a transformation in consciousness (satori, sahaj, metanoia), and “what” is seen in satori cannot be stated in ordinary dualistic words, other than metaphors, poetry, and hints (if you want to know God, you must awaken, not merely theorize).” NOTE 6